Regions are the fundamental spatial units of analysis for the Ocean Health Index. Scores are calculated for each region individually and then combined (with an offshore area-weighted average) to produce scores for the entire study area, Golfo de Guayaquil. These template regions can be modified with some effort. They were identified as the largest subcountry division within Golfo de Guayaquil. 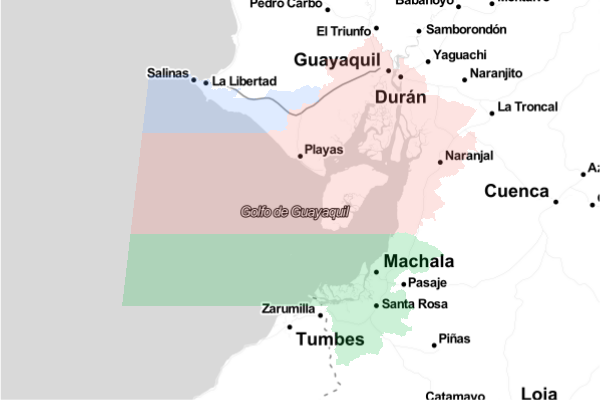 Or see the interactive map of the offshore regions on Github.

OHI Golfo de Guayaquil has the following subcountry regions, each with a unique identifier (ID):

IDs for subcountry regions were assigned geographically by increasing longitude. The entire study area (Golfo de Guayaquil) has a special region ID of 0.

Exclusive economic zones (EEZs) were identified by MarineRegions.org and the largest subcountry regions were identified by the generalized administrative boundary database GADM.org. Region boundaries were extended offshore to divide the EEZ of Golfo de Guayaquil into offshore regions. It is possible to use different regions than the ones provided here. See Create Regions for more details.

Regions were generated with the following inland and offshore buffers relative to the shoreline, which are visualized in the graphic above within increasing transparency away from the shoreline.

These data are available as shapefiles as well as csv files summarizing total area per region. Since shapefiles are binary and can be large, they're best stored outside the gye Github repository. Instead, download the zipped set of shapefiles: